ED: From AbedMOOC.com & Friends Brand Chartering: In large part risks of extinction are an education crisis. United Nations urgent need : happy AI family of avatar curators linking poorest teachers/students to deep Adaptation solutions.
The avatars need to become the number 1 brand id on the metaverse - can you help changeteacher.com? Let's do this in time to celebrate 10000 sdg young storytellers Spring 23 thks to SDGmetaverseprize.orgDAOS & all that jazz: doc on why we are so hopeful educators & students /tech wizardry & community treasuries- can celebrate sustainability generation
....Congrats to UN first ever chaos maths session (starring ed msoft's brad smith, UNEP's Noronha, Welcome Trust's Khokhar , Dept of State'sd Witkowsky -TO reaches General Assembly thursday sept 24 and zoom for all. Great update to 9th jigsaw piece CODES of UN2 Transformation - latest news on 1-8. Special shoutout Mongolia in 14 days your zooms and real hosting have shown cases of people service unique to good in the world

ways goal 4, 5 have - we had though 2 and 3 would need nfts but maybe bangladesh as egov benchmark with new uni partebsrships makes that unecessary - revisit top 30 coopetaion catalogue of abed and 1 billion girls and decide (where we say unessary may we need combo nfts - no more silos is big lesson of goal 2 and 3) from as early as 1972-1982 first 10 years of BRA-cop and UNICEF partnershisps health as well as micfranchsiing borlaug alumni knoiwhow note von neuman meant by good above zero sum games applying life ctiicla knowho multilies value in use maximising local diversity/security of food and last mile healthy infants/nothers way above zero sum as well as a journey toward green adapation/codes ultimately the 4 cultural values of muktilateral uniting peoples since 1945 need above skills solution copperated through every community - no amount of pr blah helps - in fact it greenwashes web 3 gives us chance to understand why neumanns question not asked in way empowering 8 billion peo[ple wither during 1990-2020 web 1,2 nor western dominance of global tv ad era 1964 to late 1990s tv ads when web1 started to have more woudwide consequences in communities tha1951 von neumann gave dad and Economist journalist scoop of all future lifetimes- what goods (cooperation exchanges above zero sum) will peopels do with 100 times more eech every decade 1930s to 2020s- i joined in dad from 1984 2025report, world class brands  chartering purpose- i wish the UN launch of our spevies most vital goals in 2015 had been called cooperation goals - any ideas anyone

Posted by chris macrae at 4:49 AM No comments:

eg 1980s to prep- reunite russian people with berlin wall expected to fall 1989; start tracking with digital health and jobs rich education gets communally better served everywhere; one way to keep on track was to audit new livelihoods for younger half of the world as shown

Posted by chris macrae at 5:26 AM No comments:

Execise 1; in 1984 i co-authored a book which explored this exercikse. Wjat if you and yoiur family's development depended more on what civilisg socila webs you are born into than anything else - and as of 1984 3 of these webs were yet to be buolt but their design by the end of 2020s would detremine sustainability of alkl future generations. Please note we used a differenet languahe - we were more concerned with questioning how to design digital cooperation into webs and a handful of goals the foynder of the economist and queen victoria had devated sinec 1943.

Exercise 2 what experiential  flow education from age 13 to 28 can support above entrepreneurial revolution mapping.

boardingschool north london; 1 year at cambridge before serving last days as teen navigator allied bomber command burma;with joy of surviving world war2 came 6 years of greatest scoops of any paper journalist - last class keynes "increasing oanly the handful of economist who scribbled become law rule the wporld" ; job at the economistmentiored by sir geoffrey crowther who had jyst completed teh economist's centeanry autobiograpg=hy 1943-1843 (which negan with james wilsoe influencing queen victoria - instead of slavemaking empoire how about comm,onwealth valuing 2 deepest goals end poverty, end stravation); 1951 on secondment to new york met von neumann at princeton- instructed on sharing jouranklsits greatest sccopp - what to do with 100 tuiems more etch per decade (compounded by few lucl=kiest people to get first next chnace ar=t AI for worse or for better

To frame the chalenge in today's language:

web 3 is about to be designed

web00 is communities developing without access to electricity (of course you could segment web00 further baclk to glasgow's first engineering 1760 (with adma smithsd 2 smeinal book - the last debating human and natuyral relationships begfore engines; the first debating impact on nations of forst 16 yeras of engines); and way back to late 15th c you could study actions when white euroeans race to map connections between old and new world - what 11 plus history sums up in the rhyme in 1492 columbus sailed the blue. see Footnote

a 9th box has been added coding bottom up environmental adapatbility. If UN 2.0 as benchmark for digotal gov anywhere is to be mediated a question may be can educators be helped by design of web3 to empower youth celebration action learning networking through above provesses and priortiting any of the 17 goals whose solution most urgently need to be app'd or meta'sg out of the communities they grow up

Footnote 1 personally i wish teachers could have added another tedx style module (even one more verse) for my 11 yera old brain on Amerigo Vespucci Between 1497 and 1504, Vespucci participated in at least two voyages of the Age of Discovery, first on behalf of Spain (1499–1500) and then for Portugal (1501–1502). In 1503 and 1505, two booklets were published under his name, containing colourful descriptions of these explorations and other alleged voyages. Both publications were extremely popular and widely read across much of Europe. Although historians still dispute the authorship and veracity of these accounts, at the time they were instrumental in raising awareness of the new discoveries and enhancing the reputation of Vespucci as an explorer and navigator.

Vespucci claimed to have understood, back in 1501 during his Portuguese expedition, that Brazil was part of a continent new to Europeans, which he called the "New World". The claim inspired cartographer Martin Waldseemüller to recognize Vespucci's accomplishments in 1507 by applying the Latinized form "America" for the first time to a map showing the New World. Other cartographers followed suit, and by 1532 the name America was permanently affixed to the newly discovered continents.

(master editior amandeep; 25 tech leaders chaired by melinda gates and hjack ma who had been invited fall 2016 to be unctads worldwide trade youth entrepreneur coach as a second sosequence of year 1 reciew of sdg4 - wont hapen in some countries until 22nd C unless).

Posted by chris macrae at 4:23 AM No comments: 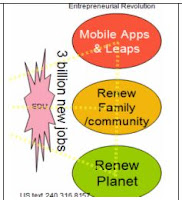 Posted by chris macrae at 6:59 AM No comments: